History of The Bluegrass Bus Museum

In 1962 Donald Roy Clark watched his first episode of the Beverley Hillbillies. It was the opening theme song of the Beverley Hillbillies that introduced Don Clark to the sound of Earl Scruggs' banjo. He immediately became an avid fan of the show and was glued to the television set whenever Lester Flatt and Earl Scruggs made a guest appearance. There was something about the twang of Earls' banjo and the solid rhythm of Lester’s guitar that enticed Don Clark to buy his first Flatt and Scruggs album. 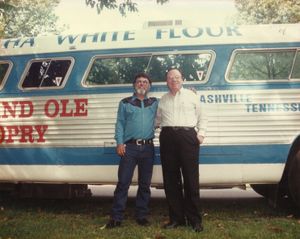 It was the many publicity photos of Flatt and Scruggs standing in front of their Martha White touring bus that burned a vivid image in the young childhood mind of Don Clark. In 1987 Don Clarks' childhood dream came true when he purchased a 1955 Flixible bus from a feed and tackle shop in Baldwin Ca. Don immediately started getting autographs on the inside of the front door with the first signatures being that of Bill Monroe and his son James. The bus includes hundreds of autographed photos along with personal items from bluegrass and country music legends.

The bluegrass bus museum is in fact a gathering place for many country and bluegrass music legends. Artists such as Bill Monroe and Earl Scruggs have graced the bus with their presence. Marty Stuart and Ricky Skaggs have all enjoyed the bluegrass bus. Country legends ranging from Grandpa Jones to Dwight Yoakum have visited the museum. From coast to coast the bus has entertained people at thousands of musical venues, and has consistently been a draw for music fans, ranging from festivals in the lower 48 states to main stream musical events such as IBMA World of Bluegrass, SPBGMA, and Nashville Fan Fair.

The bus has been all over the country and everyone in bluegrass, fans and entertainers alike, have enjoyed all the memorabilia that Don has on the bus. It is not unusual to find someone with a tear in their eye sitting on the bus at a festival as the powerful impact of the "Bluegrass Bus Museum" will bring back many memories. One could sit on the bus for hours and not see everything. Don rotates the pictures, posters and memorabilia on a regular basis. "I'm always after anybody who wants to donate pictures or something old
for the bus." says Don.

The first ever Bluegrass Bus web site was created by Bob Cherry and was hosted on his web site CyberGrass. The bus has been featured in many publications including Bus Conversions Magazine (Sept. '96) and Bluegrass Unlimited (Aug. '97). In 2003 The Bus was featured on the Discovery Channel Program Weird Wheels. In 2004 the bus was also featured in a CMT short video clip for their top 20 countdown.

This classic 1955 Flixible Bus was manufactured in Loudenville, Ohio it is called a Visaliner or "Clipper" because the radiator shroud is located on top, at the back of the bus like a clipper ship sail. Flatt & Scruggs had a 1948 Flixible bus, the bodies are very similar. Don's bus is powered by a (4) stroke 8.2 Liter/500 c.i. Detroit Fuel Pincher Diesel V-8 engine with a 4 speed Allison AT-545 automatic transmission. The length is 35' and the width is 8'. 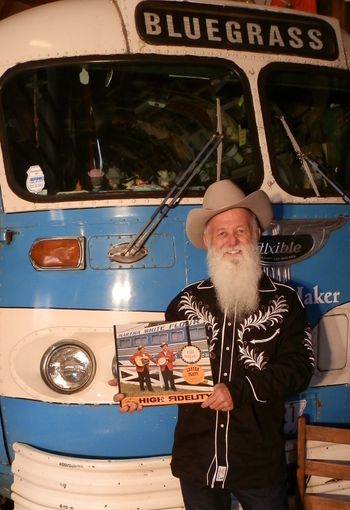 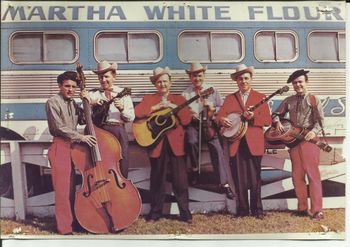 Color Photo of Flatt & Scruggs in front on one of their tour buses. 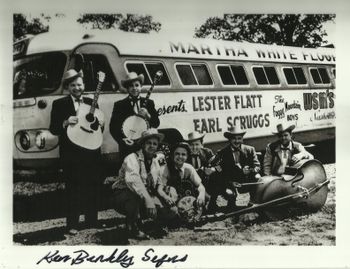 Flatt & Scruggs standing in front of their Flxible Tour Bus.